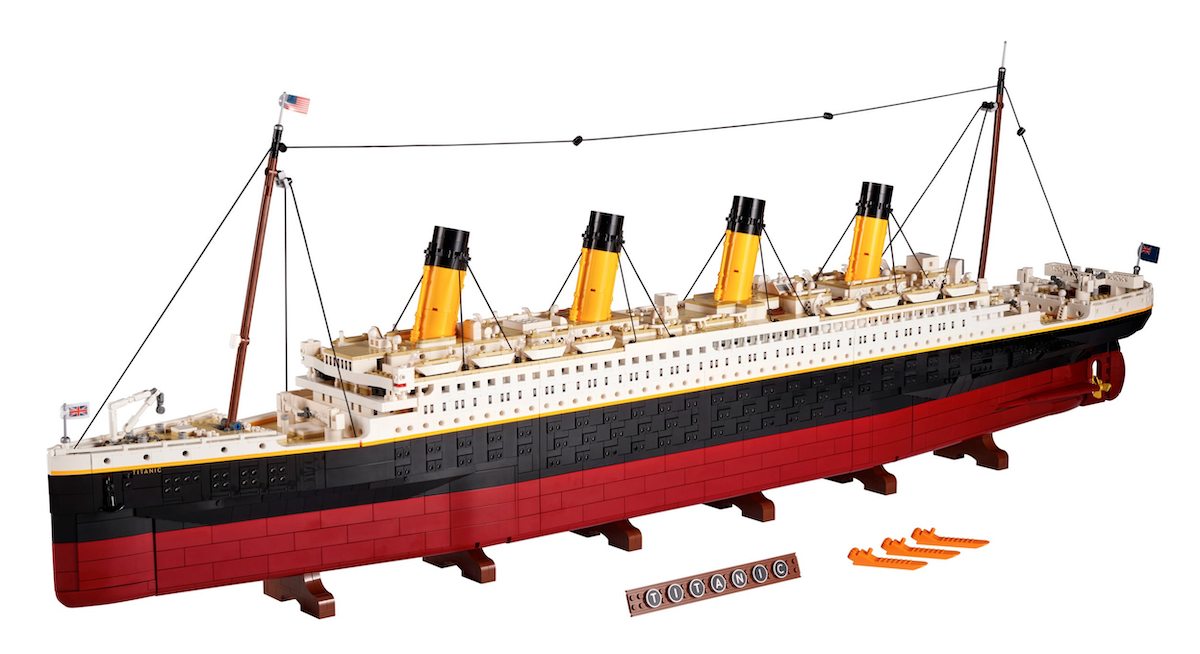 Is the LEGO Titanic the Ultimate ICONS set? In 2021, LEGO released Set 10294 – The Titanic. This Legendary ship is an amazing replica and is meant to be displayed. But I have other ideas for it.

What is the Titanic, anyway?

The Titanic was a luxurious passenger ship that sunk on On April 15, 1912, just 5 days after its launch. the Titanic struck an Iceberg and sunk.
While exact numbers are not known, it is estimated that there were 2,224 passengers, and over 1,500 died.

It was also very luxurious for the time, with lots of high-end details and amenities for the rich passengers who used it to travel across the Atlantic.

How Many pieces are in the LEGO Titanic?

Released in 2021, this set has 9,090 pieces. This made it the largest lego set ever when it was released.

It was bigger than the next biggest set, the LEGO Colosseum which was just released the year before and has 9,036 parts. The UCS Millennium Falcon only has 7,541 pieces.

This makes the LEGO 10294 Titanic an excellent value with price per piece of 7 cents per piece. The average is 11 cents. Most sets are in the 9-16 price range.

How long does it take to build the LEGO Titanic?

According to the Guinness Book of World Records, the fastest build is 8 hrs 42 mins 12 sec, and was achieved by Sebastian Haworth (USA), in Springfield, Virginia, USA, on 22 May 2022.

On average an experienced builder would take 2-3 days of consistent building and need a very large table (or two).

Some have said that this is a perfect replica of the original ship, and I have to agree.

Let’s start with some of the basic stats, and continue with a complete review of the LEGO Titanic 10294.

How big is the LEGO Titanic Box?

Inside the high quality packaging, there are 3 separate boxes corresponding to the three sections of the ship. And when alligned there is a nice blueprint of the ship as well.

Throughout the instruction books there are black and white photos of the original, as well as little call outs with facts and details about the ship.

This set is so big, it comes with 3 brick separators!

Exterior details of the LEGO Titanic

We all know LEGO is a grid or square-based system.

Mike Psiaki, the designer for the ship is very clever in the use of parts to make the ship’s hull curved in a very realistic way. This ship looks like a real detailed model!

The deck is built in a microscale and has such details as cables for the smokestacks, miniature lifeboats, and more.

The color choices match the real ship as well. Deep red and black for the hull below the waterline. White and tan for the deck and other topside areas, and bright light orange for a stripe detail and the color of the smoke stacks too

On the bow of the ship is the name “Titanic” as well as three black anchors and a Union Jack flag.

There are about six cargo cranes that you can move around and were used to load luggage and supplies into nearby hatches that lead below.

The brown mast is topped with a crow’s nest and a US flag. One cool detail is that in the year the ship was made there were only 46 states, and you guessed it, the flag only has 46 stars! Such detail!

You can see the ship’s bridge, as well as air-vents, portholes, and a docking bridge.

The rudder moves side to side, and the three propellors are attached to shafts that go inside the ship to the engine room.

Holding up the model are 6 brown supports. LEGO Typewriter buttons spell out Titanic on the display stand, too.

Separating the LEGO Titanic 10294 into 3 Sections.

On the deck are two cleverly hidden locks that allow the ship to separate into three sections. Yes, the ship splits into 3 display parts!

This way you can see cross-sections of all the different levels and decks which is one of the coolest features of the build.

The interior isn’t just a bunch of scaffolding bricks to hold up the outside, but a highly detailed interior!

The engines are visible in the boiler room, as well as the grand staircase, and some cabins where people stayed.

While not prominent the titanic had a swimming pool that was filled with seawater that’s made with trans-blue tiles.

A dining room can be seen, too.

At the Stern (back of the boat), and at the bottom are two grey engines. These piston engines turn inside and can drive the screws (propellors) outside.

To take it one step further, the engines can be removed from the hull for closer examination of all the details.

I would love to see someone put a LEGO motor and power pack inside so that the propellors could turn automatically. That would be a cool moc!

There are also lighting kits for the 10294 titanic. While I haven’t purchased one I think it would be a neat addition.

I was impressed with how sturdy the build is. It isn’t fragile at all, and can easily be moved (with 2 hands) as needed.

This is a quality build with incredible techniques and details. I’d like to be able to permanently display this LEGO set, but frankly, it is just too big. And with a low piece count of only 7 cents, this ship is destined to be disassembled sorted and used for future MOCs

Have you decided to purchase the LEGO 10294 Titanic? It’s a rewarding build and one of my favorite LEGO sets of all time.