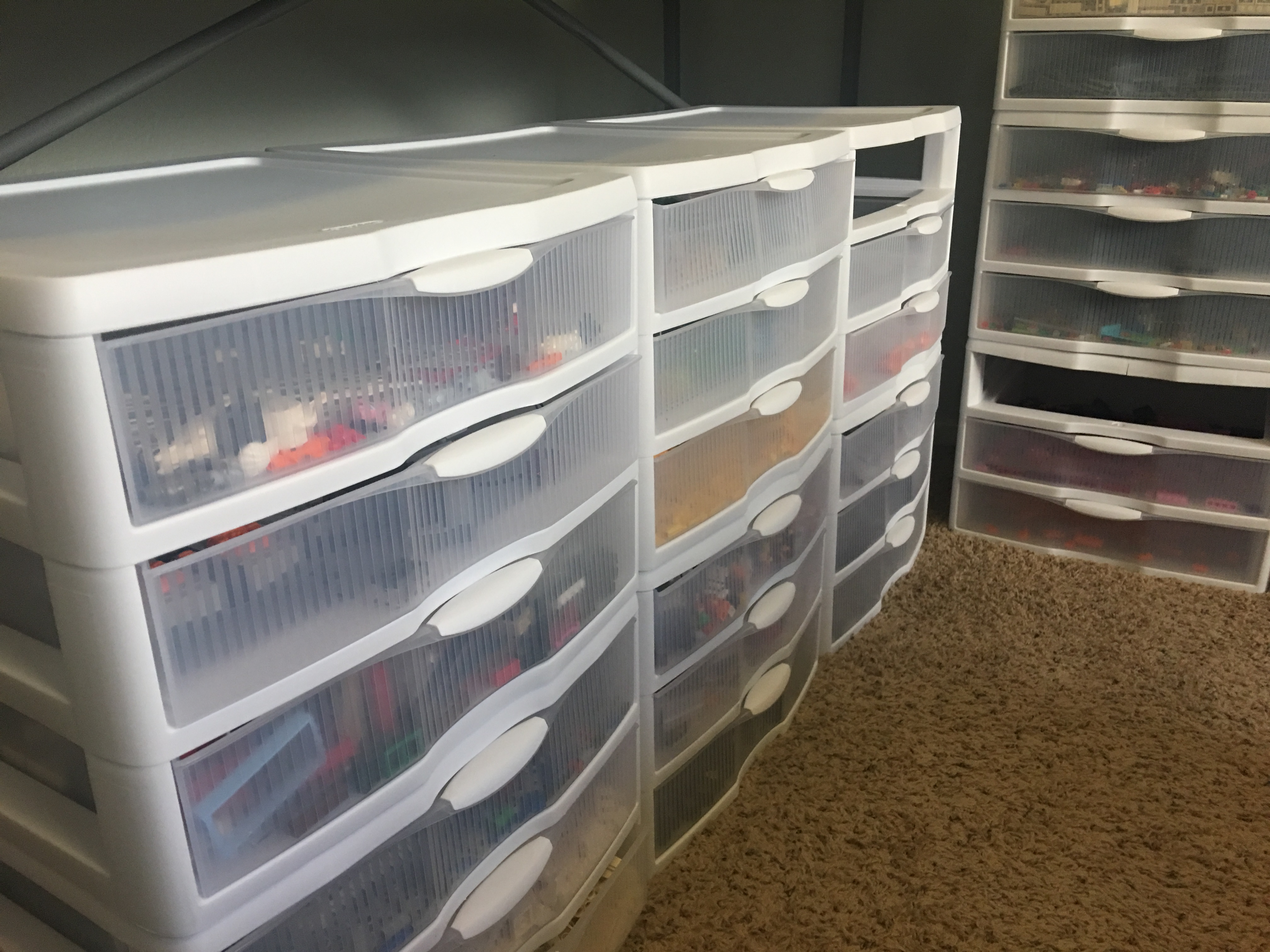 Over the years I’ve come up with a method to sort and store LEGO bricks that allows me to find the exact piece I need in just a matter of seconds.  But getting to this point took a lot of work, and the storage method I use takes up a lot of space.

At some point, it becomes necessary to sort LEGO to quickly and easily find the piece you need.  There are lots of different ways to organize the bricks, and I’ve tried most of them.

When I was just starting out, I only had a few sets, so it was easy to just keep all the pieces in a plastic  bin that I got from Target.  It wasn’t too big, had a removable top, and clear sides so I could simply see what was inside.

But over time, the number of sets I collected grew, and I quickly needed more space.

At first I decided to get a few more, and larger bins like the one I had but it didn’t take too much time to outgrow that, too.

I needed a long term solution.

Something that would be good for both accessing pieces quickly, not take up too much space, and of course look good.

But before I got there, I had to try a few different variations, because I needed to see what would really work, for me!

All these different suggestions are  great ways to store LEGO bricks and sets, but ultimately I ended up with a solution that was pretty unique.

Over the years, my LEGO organization and storage changed – here’s the basic progression.

Like I mentioned above, I started storing LEGO in a big bin.

After unboxing and building a set, I’d play with it for a while, maybe take some photos for my LEGO Instagram, and then put it on display or toss it into the bin to be used as spare parts.

While this system works when you have less than 10 sets, this isn’t the best term for making MOCs, long term storage, or overall organization.

My second attempt at storing LEGO in an organized way was to use the Ikea Trofast system.  I’m not the first person to ever think of using Ikea to Store LEGO, and lots of people have used this method.  It has 2 parts, the bins and the frames, both of which come in different sizes so it is easily expandable as my LEGO collection grew.  I started with a simple series of small, and medium bins, but quickly outgrew that method into multiple large bins and several larger frames.

A Trofast unitl like the one above costs around $60, and will easily fit into a standard size bedroom.  There are 6 drawers, and space on top to display completed sets.

But as my collection kept growing, It wasn’t long before I needed a new, better storage method.

About the time I was filling multiple Trofast units, I began to work on my city, creating MOCs and custom builds.

I was wasting too much time looking for pieces, and not enough time building!

I needed a better way. I wanted an expandable system that was not too expensive, and easy to get.  I also wanted drawers that were removable, see-through (so I could easily identify the LEGO parts inside), and I wanted the drawers to be more shallow, and not too deep. Sort of like a removable tray that was easy to dig through.

That’s when I saw this video by JangBricks.

It looked like heaven!  Look at all that plastic storing plastic!

He uses a ton of Sterlite drawers to sort his LEGO collection into colors and general style.

Each drawer has a specific color, or specific shape, or particular style of piece.  He also uses some clear plastic dividers to sub categorize items within each drawer.

I thought this was the perfect method, and I began the reorganization process.

How to Sort LEGO Bricks

Moving from a single bin Lego Storage to multiple drawer units took a lot of time.

I started by buying a few of the drawer units Jangbricks uses.  At first I bought a couple at a time from Target, but when I needed more I turned to Amazon and started buying the 3 drawer storage units in bulk.

I started with just 2 3-drawer units.  Each drawer is approximately 32 x 32 cm, and about 6.5 cm high.  I had 6 drawers, and way more LEGO than would fit in them. But I had to start somewhere and so I began the first great sort

To begin sorting, First I filled an old shoe box with several handfuls of bricks from the Trofast bin.  There were all kinds, shapes, and colors of bricks, minifigs, plates, slopes, and special pieces mixed in together.

What I needed was a quick way of sorting.

I took out all 6 drawers and arranged them in a rainbow in front of me on the floor.  Each drawer would get a specific color, or specific kind of brick. Here’s how I filled the first 6:

I should also note that I separated every single brick.  There was nothing saved. No sub assemblies, no special builds, no Mocs, or sets.  If it was in the bin, it got taken apart into the smallest LEGO unit possible. Single pieces.

I hand picked everything.  I’d first go after all the white bricks until they were gone.  Then I went to Black bricks.  And on and on.

The first drawers each had a color in them, or at least a color theme.  If a piece was black, it went in the black drawer. If it was white – into the white drawer.  This included plates, bricks, odd shaped pieces, technic, clips, doors, windows, whatever. If it was the same color it went in the drawer.

Grey was a bit different – I followed the same basic rule – ignoring shape, but focusing on color.  This included light grey, dark grey, and very light grey. 3 grey colors in one drawer. As you can imagine, this drawer filled up the fastest.

Minifigs got their own drawer.  Complete minifigs, as well as minifig parts that may have been separated: legs, torso, arms, hands, heads, hair/hats.  I debated about putting weapons, or tools in this drawer, but decided these should instead go in the Special Pieces drawer.

The final drawer was the special Pieced drawer.  This included pretty much everything else: trans and clear bricks and plates, things minifigs hold, wheels, large odd shaped pieces, fabric pieces like sails or carousel canopies, printed bricks, bricks with stickers.  If it didn’t fit into one of the 5 drawers above, this was the catch all for everything else.

As I filled a drawer completely, I would then buy another set of 3 drawer Sterilite units for Lego storage.

It took a few weeks of sorting to get through my big bin of parts. I’d spend a few hours every night after dinner filing drawers.

Soon I had 3 drawers full of minifigs.

My Special drawer began to get full, and I broke them out into Power functions, boats, and trains.

When I had 3 or 4 full bins of color bricks, I began to sort them into their individual colors:

Red, blues, greens, oranges, pinks & purples, yellow, and all others.  It was a beautiful plastic rainbow.

Quickly I went from 6 drawers to over 40.

And when my Lego Ikea storage bins were empty, I sold them on Craigslist.  That’s when my final phase of sorting began.

Now that I had a room full of LEGO bricks sorted by color into individual Sterilite drawers it was a thing of beauty.  But it still took too long to find a specific part. Going back to YouTube I saw a video by Kevin HInkle, and how he sorts his bricks:

This was perfect!  I would be able to quickly find any piece I needed in a matter of seconds!

Look at all those Akro-Mills 64 Drawer Storage units!

Every drawer has one type of piece.

Really, when you are looking for a piece, you aren’t looking for a specific color, but instead you are looking for a particular shape.  Wouldn’t it be amazing if you could find all the 2×4 red bricks in a few seconds? What if you needed a blue one, or a black 2×10 plate?  Or the ever hard to find 1×1 grey plate, or a blue 1×2 jumper. With this system I could get any of these immediately, and in quantity if needed.

Of course this meant I needed to invest in an entirely new type of storage drawers.  I found these 64-drawer storage units by Akro Mills on Amazon. Each drawer could hold between 8 and 100 LEGO pieces depending on size.  Each 64-drawer unit would hold one color – 64 different pieces, sorted into its same shape, and color.

Since I already had done the hard work of sorting into color, I thought it would be easy to sort into shape.  Not so! It takes me about a week to sort out a full color into one of these units. Every week I order a new unit from Amazon, and when it gets filled, I simply order another.

Here’s the pattern I follow for each 64-drawer LEGO storage system.  Remember each is a single color

Now, not every color comes in every shape, so those drawers stay empty, but maybe someday LEGO will make that shape, and I’ll have a place for it.

Obviously some things don’t fit in the tiny drawers.  Thinks like base plates, LURPS, longer pieces, 5×6 wall plates, fences, odd size slopes, lamp posts, and so on.  These stay organized in their specific color drawer. It’s still super easy to find the piece I need because I don’t have to sift through so many pieces to get to the exact one.

Overall I’m very happy with this storage method.  It has taken me a long time to sort and organize everything, and I’ve spent some money of drawers, but not as much as I spend on LEGO.

But I have saved a lot of time.  I can find any piece I need immediately.

Plus it looks pretty cool, too!

How do you store your LEGO collection?  What is the best way you’ve discovered?