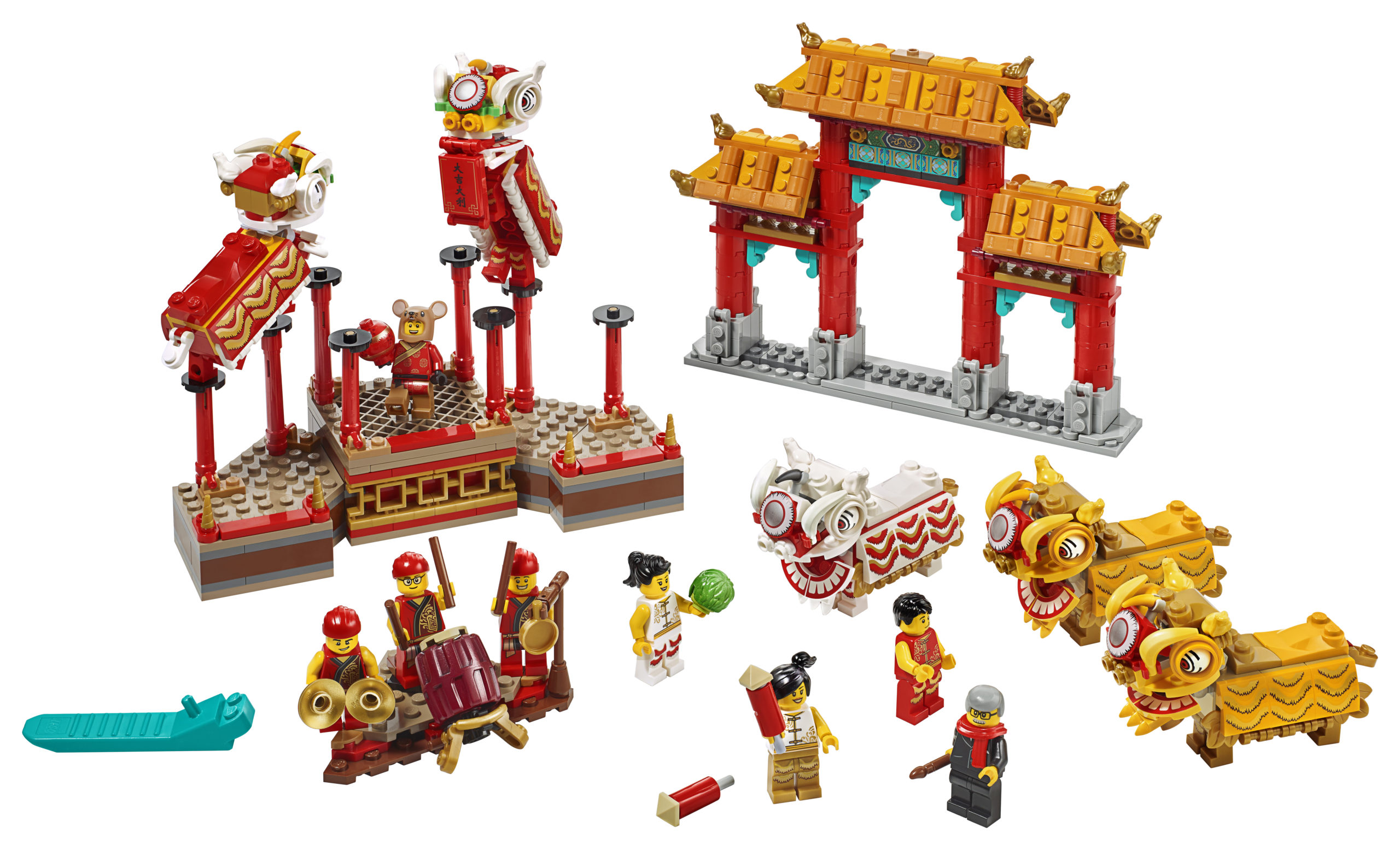 I just heard hat LEGO is releasing not just one, but TWO new Chinese sets. This one is set 80104 LEGO Chinese New Year Lion Dance. The other is 80105 LEGO Chinese New Year Temple Fair. I dont know why I love these sets so much. Sure they are new, and have super cool details. Part of it might also be that the first two sets LEGO released were limited editions that only came out in Eastern Asia, Eventually the Dragon Boat Set was released in the United States, and I have that one, but I’m still missing the New Year’s Dinner.

I found this video on YouTube but it isn’t on the official LEGO channel so let’s see what happens with it. LEGO did include a video in their press release which is what this one is, so instead of duplicating content I’ll just link to this guy.

When available, I will post the official LEGO set PHOTO here (then change it to my set photo when released).

According to everything I can find about this set, the Lion Dance LEGO set will be released on December 26 of 2019 as a limited edition, and then globally after that. The press release says :

will be ready to discover in China and Asia Pacific markets from December 26, 2019 and the rest of the world from January 10, 2020.

I’ve been following LEGO for a long time and they always release some cool sets right after the Holidays so anyone who gets some Christmas money can spend it on the new sets. Or maybe they return a set they already have and get one of these new ones. Either way, I’ll be getting mine the day after Christmas for sure.

These sets always have a lot of minifigures, which as you know I absolutely love. By my count there are eight (8) all together – the three lion dancers, the family of 4 that we have seen in other sets, and the final one which is a person in a rat costume, because it is coming out in time for the year of the Rat.

Some of the characters have dual faces, like the son from the family, and the rat. I really like all the different expressions that everyone has, as well as the multi colored printing on all the minifigure torso and leg pieces. Plus there is a cool scarf piece the father minifigure has.

When sets are pre-released like this its hard to know if there are any new elements or pieces unless they are specifically called out by LEGO. So far what I know is that this set will have a bunch of minifigures and some pieces. Nothing else has been said so far

Coming soon! As soon as I have this cute little LEGO set in my hands, I’ll share it with you and update this post.

From the looks of the official photos, there will be a 2 story LEGO gingerbread house of course. Downstairs will have a living room scene with a fire place and a small kitchenette. Upstairs is a bedroom and a bathroom with a tub. Lately there have been a lot more LEGO bathrooms being built – hmmm….

All these images were obtained from the official LEGO press release for this set. When the sets become available, I’ll swap these out with my own original pictures, of course.