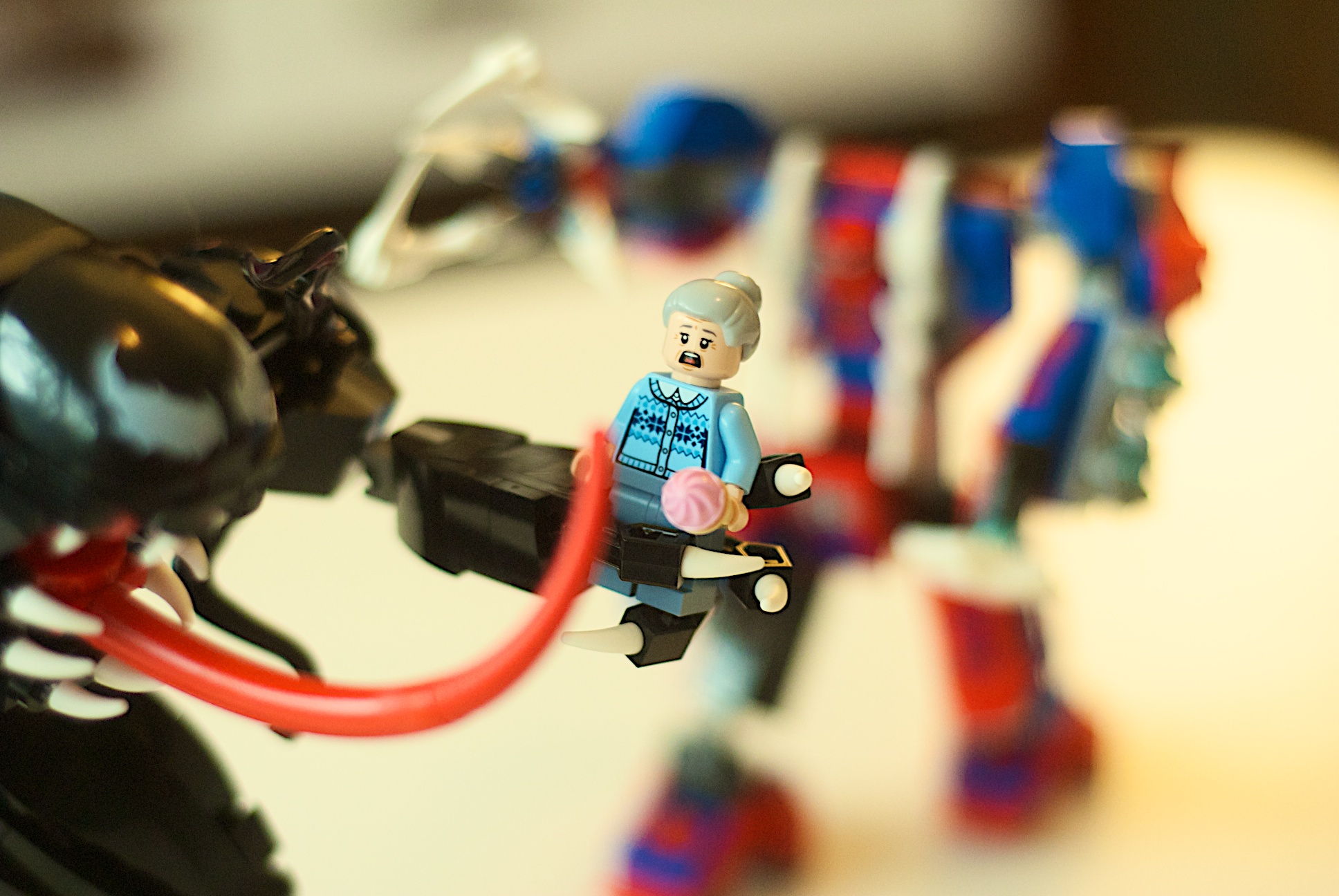 Oh NO! What’s going to happen to Aunt May? Is Spider-Man going to be able to save her in time? If you ask me, I think Venom just wants some tasty LEGO Ice Cream.

I ordered this set from Target, and picked it up on the day it was released.  Once I opened the box, inside were 5 labeled bags, one sticker sheet  and 1 instruction book,  a bag of new LEGO web elements, and an orange brick separator.

There are 604  pieces in this set, including 4 minifigures.  You get a Spider-Man, Ghost Spider, Venom and Aunt May.  In addition to building the Spider Man Mech and the Venom Mech you also get to build Ghost Spider Hover Board.

This is a pretty easy set but isn’t my first choice for beginners.  I’d put this more of a lower intermediate set, not quite good for a first set, but better for some one who has built a few LEGO sets before.  As I always say, if the set comes with a brick separator, it’s not for beginners, and this set has 1 orange brick separator tool.

In this set, you get 1 instruction book.  The steps are not too complicated and easy to follow for someone who is just getting started collecting LEGO.

There are 5 bags, and the first bag had me building Spider-Man, and his Mech.  All in the first bag.  The Spider Mech isn’t as big or as fancy as the Venom one, but it does have moving arms, legs, hands and feet.  It also has a cleverly designed claw made of mostly the new web pieces, as well as a little shooter on the other hand.  Spider man stands atop the mech and is connected by 2 studs (so he doesn’t fall out), and controls the machine with some levers.

Moving to Bag 2, this contained all the parts for the Ghost Spider, and his hoverboard.  Plus a few to get started on the torso of the Venom Mech.  The Ghost Spider Hoverboard has a couple of stud shooters, and a surf board element with a sticker.

Bag 3 is when we really start to build the Venom Mech.  This bag builds most of the Torso, including the head and the mouth with the teeth.

Bag 4 continues to work on the Venom Mech with the legs and feet being put together.  It doesn’t get very repetitive, because there are only 2.

The final bag, Bag 5 has Venom Mech Arms and hands with claws.  Plus at the very end you get to add the super long tongue which is the perfect final addition.

Overall the Venom Mech is way cooler than the Spidey Mech.  But Spidey has more features.