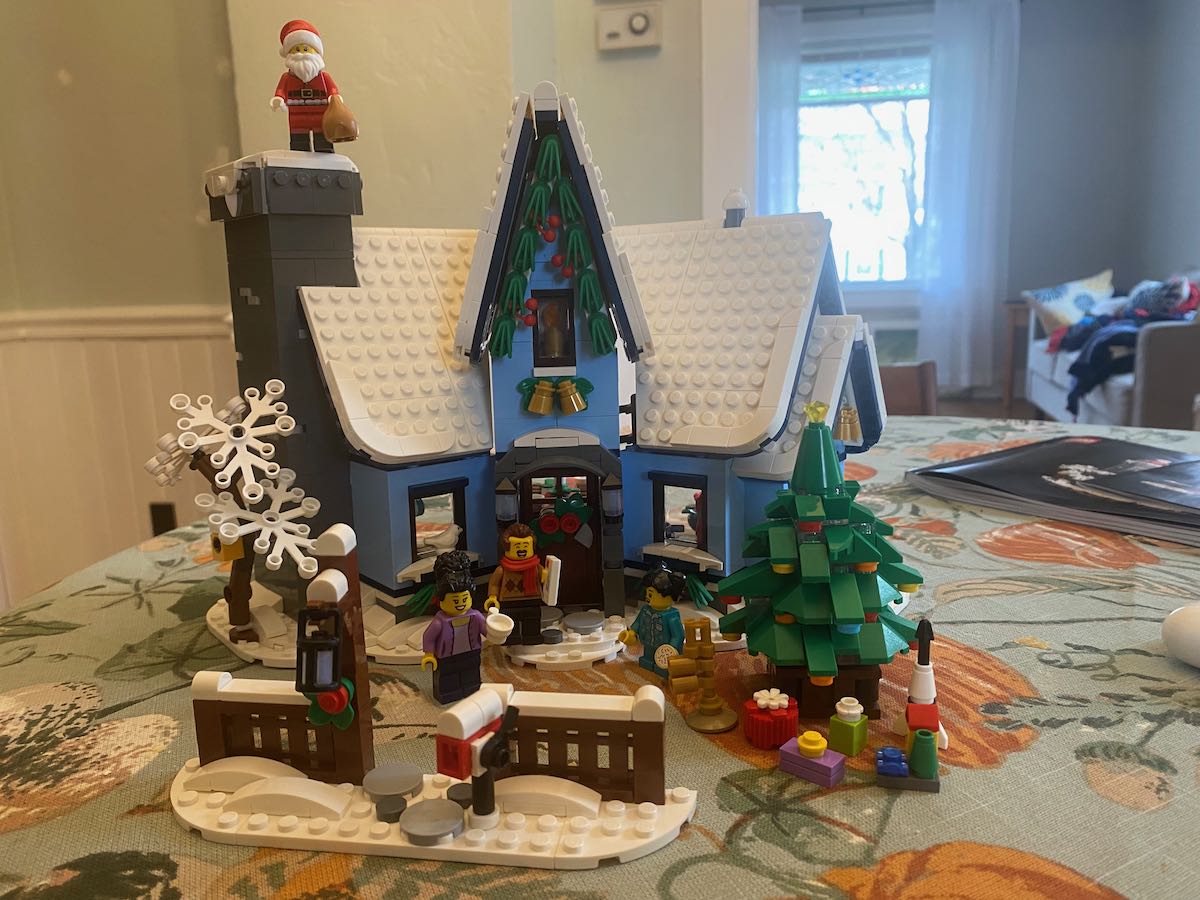 Every year, LEGO releases a new holiday-themed set. This year it is Santa’s Visit – Set number 10293. It’s a cute little blue cottage with some new to me parts, four minifigures (including perhaps the best Santa ever), and some cool Christmas related features!

Of course, I had to get it, but it wasn’t until today that I decided to review it and share this with you.

Of all the themes, my favorite three are the modular buildings, LEGO trains, and these holiday sets. The LEGO winter village collection is full of festive details and is great to build alone or to spend quality time with the family making perfect Christmas Eve scenes.

There was one other set called Santa’s Visit that was given out during the holiday season of 2015. The old set, 40125 Santa’s Visit had 167 pieces and came with a Santa Minifigure standing next to a tree and a hearth.

This new set has 1445 pieces, which builds a nice blue house that is the perfect seasonal display in the Christmas theme.

In addition to the house which has some cool easter eggs (play features), there is a Christmas tree featuring a light brick.

Also, of the 4 Minifigures, there is a family of two adults, a child, and a new Santa Claus Minifigure with dual printed legs.

This set comes in a single box that has newer graphics and colors on it. The black cardboard box has two push tabs on the side to open it instead of the tape that is sometimes used to seal sets.

Inside the box are 2 instruction books, 1 sticker sheet, and 9 bags of bricks.

My regular readers know that I’m not a big fan of stickers. I much prefer printed bricks, but I’ll talk about that more below.

On the instruction book is a QR code, that, when scanned takes you to a link to download the LEGO Builder app.

The house model that is the majority of the set is the Light Royal Blue color, with earth blue and white accents.

Inside there is a main level with 3 scenes. There is a kitchen, a table, and a living room with a hearth.

A second smaller level is a bedroom scene with a bed, dresser and a cool photo of a rocket.

The entirety of the first bag of bricks is built using only the smaller instruction book. As is traditional, the build starts with the 3 family Minifigures with dad mom, and a girl. And the first to be completed is the girl.

Next is the snow-capped fence with a red mailbox. This is where it begins to get fun. The mailbox is built using a different technique than I was familiar with, and it comes out looking quite realistic.

Possibly the best part of the build comes next. It is a Christmas tree that features a light brick with battery included.

When you gently press down on the top of the tree, the light comes on and shines through the branches. It’s a cool effect that I’ve never seen before.

This is accomplished by carefully alternating green sloped bricks with trans clear plates, all built around a holllow base that is 2×3 bricks wide (the exact dimensions for a light brick to fit in.

If you have a hard time getting the LEGO light brick to work, be sure to pull out the little black tab on the bottom. LEGO ships it with this so the battery won’t run out during shipping or storage.

But if you need to, you can also replace the battery if you take out the small screws on the bottom.

The different levels of the tree also have small colored 1×1 round plates to resemble ornaments. And the Tree topper is a yellow LEGO gem.

The end of the bag has a bunch of little pieces that are used to make 5 different gifts. They are a small house with a tree, a red circle present, a purple box present, and a brick built mini rocket (that matches the photo in the loft room), and a brass looking trumpet.

All of the rest of the bags are used to build the house model to display and complete the cheerful scene.

The next group of bags begins the foundation of the building set. The first thing is to create the mother Minifigure, who is holding a white LEGO tea cup.

Then we begin to build the actual base of the house. This isn’t the usual 16-wide modular standard. No, instead it consists of three baseplates that are creatively angled together with hinges.

Part of the baseplates are brown, and the other part is white. The brown part signifies the floor inside the building, while the white represents the snow-covered ground outside the structure.

There is a checkerboard tile area that becomes the floor of the cute kitchen, a few round plates near the front door, and a clever technique to make the flames of the fireplace move.

In addition, there are dark grey 1×2 bricks with a masonry pattern around the perimeter as a foundation for the house.

The front and sides of the house have regularly decorated walls, while the back is open for easy access and display.

This is the part of the build that has some more of my favorite elements.

Most of the detailed work is focused on the kitchen area, but we also begin to work on the window sills.

I’m always intrigued by the way LEGO designers make their windows. There is always an element of depth and contrast to them which makes them more realistic. I pay attention to the way they are made so I can use them in my builds.

Some of the details in the kitchen are the sink, a red brick built stand mixer, and the sand green kitchen cabinets.

I pay particular attention to the kitchen sink in this set. I do a lot of modulars and I’ve never had one made this way before. I will definitely be incorporating it into my MOC building.

One other hidden surprise is a purple present which is tucked away into a corner of the living room. This is just one of several gifts hidden around the house.

Also in the living room is a clever use of 1×2 round bricks on their side. You can easily tell that they are supposed to be a stack of logs next to the fireplace.

Opening bag 4 reveals a lot more of the Light Royal Blue bricks. These are used to make the majority of the walls of the structure.

The dark blue-grey tiles begin to extend the hearth in the intricate Christmas house model, and the windows go in.

The front door is placed, but before it goes on the baseplate, a brown version of this 1×2 rounded plate is used to create a wreath and attach it through the windows of the door. I’m not sure if this an illegal building technique, but I don’t think it is.

Bag 4 finishes by placing the baseplates that are the floor on the 2nd story.

Next, more of the grey and blue bricks are used to build up the large chimney. A few of the sticker pieces are used for the clock and portrait over the mantle.

Another cool detail is the stockings on the fireplace. Little things like these extra details complete the model-building experience.

A brown chair is built, and placed in front of the purple present from bag 3.

Next to the fireplace, a plate sits on a small round table. It has cookies with milk. The plate of cookies and milk for Santa is more of an American tradition, but if you are in a different country, you could easily customize it for more traditional details of Santa’s visit.

Bag 6 starts with a Minifigure build. This time it is the little girl – holding a 1×1 round tile with sprinkles printed on it. This is a new cookie, and I read somewhere that it resembles the Christmas cookies that the designer’s mother used to make.

Then some basic Technic pieces are used over the windows in the kitchen. I don’t want to give away any spoilers as to what they will b used for right now – we will find out soon enough!

Some gold pieces are used to make Christmas Bells over the kitchen window too.

Now our attention turns to a small snow-covered roof.

This is where the technic pieces come in. They fit into some technic plates on the underside of the roof and allow them to be positioned at the proper angle.

The bag is finished by building furniture.

First, for the bedroom on the 2nd floor. A desk and bed are brick built and another sticker is used to make a rocket poster hanging on the wall.

Finally, a table with a red runner and matching chairs are constructed. It’s the perfect place for a cozy family Christmas eve.

Large white plates with curves and angles compose the roof. This entire bag is used to make one rafter connecting the left and right sides of the home, and then 4 roof components are made.

Normal hinges are used to attach the roof to the house, and this reliable technique works well.

The second to last bag finishes the white gabled roof and adds some minor details to the chimney.

This almost the chimney build which is just large enough to allow a Santa drop through it. Just like he was coming down the chimney on the Christmas Eve.

The Santa Claus Minifigure for this set has been updated with dual molded legs (he now has black boots), a new face, and a new torso print too. The upgrade was needed, and in my opinion, was worth it.

There are some more roof and chimney details that are completed – like adding white bricks to resemble more snow.

Lastly, a small LEGO tree is made with a simple yellow birdhouse.

The Christmas tree is one of my favorite parts of this build. The tree top is a bit simple with just a jewel piece (no star or angel). It goes well with all the brick built boughs that are all over this set.

As I mentioned the tree features a light. There is a battery included that lights up the tree from the inside. It’s built early in the set so you get a nice magical start as you build.

When you press down on the tree you add a festive glow to the set and it makes the holiday display worth it.

The Designer of the LEGO Santa’s Visit 10293, Chris McVeigh

Chris McVeigh is credited with over a dozen sets as a LEGO model designer. In addition to many brick sketches, he is responsible for the 2020 Elf Clubhouse, 2021 LEGO Modular Police Station, 2021 Bird of Paradise, the retro Atari Set, and of course the Santa’s visit set.

You can see more of his work on Instagram.

I really like all the festive details of the Christmas Eve scene. The Santa’s Visit 10293 building kit is a fun project that takes a bit longer than an evening of building so the fun lasts over a few days.

You get to recreate endless cozy family scenes with a dad mom girl and Santa Minifigures.

This is a magical Christmas build with all the traditional details of the LEGO winter village collection. I give it 5 stars as the perfect seasonal display piece.