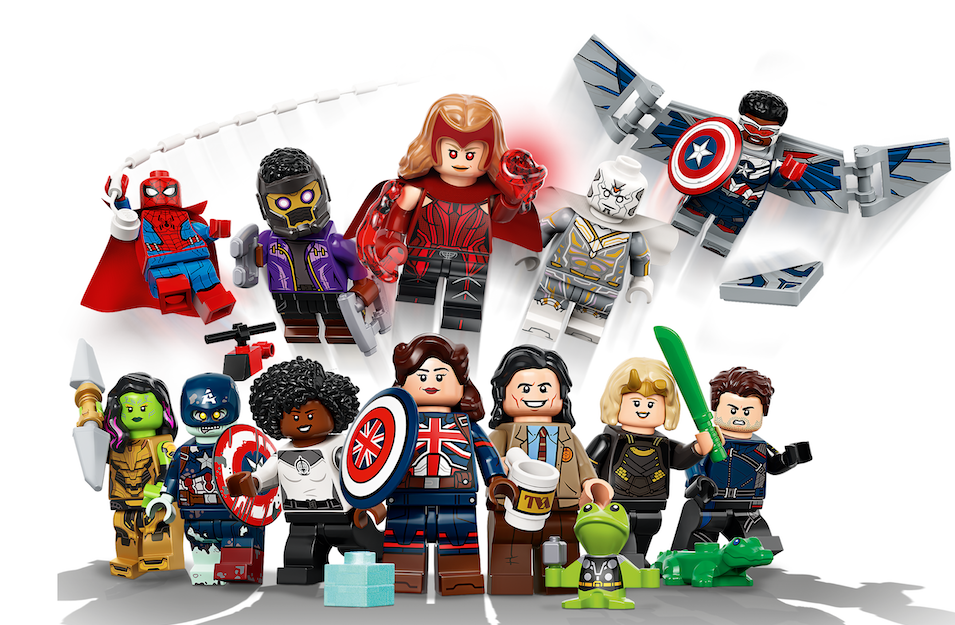 Earlier today, Monday July 26, I noticed the LEGO website had changed with an entry for the new Minifigures from Marvel Studios! This is so exciting!

Are you looking for one of the new LEGO CMF Marvels Minifigures? Rumor has it that there will be new minifigures from the LEGO Franchise in the September 1 of 2021

This series will also be in blind bags, but there won’t be as many minigies as usual per case. This series has only 12 different characters – the complete list is below. I’ve been collecting these minifies for quite some time, and am on my way to having a minifigure wall showcasing them all.

These are all the current Marvel Characters from WandaVision, Loki, The Winter Soldier and other Marvel and Disney+ Shows.

These are authentic LEGO Verified 100% original LEGO, and available for pre-order soon! We will sell these at cost $4.99 US, however the prices DO go up once the series is released and we learn which minifigures are rare, or popular.

This set follows the extremely popular LEGO 71030 Looney Tunes Custom Minifigures There were some people that subscribed to the site to be notified when the series was released and they were able to get their minifigures a few days before release by pre-ordering.

This announcement is to let you know that I will soon be taking pre-orders for the LEGO Looney Tunes Minifigures. You can visit this page and sign up for alerts when the pre-orders will be ready. These blind bags will be opened to verify contents, but you will receive the minifigure you request, as well as any accessories, inserts, or extra pieces. Ordering early locks in the lowest price, and guarantees delivery of the exact minifigure you want without having to search, feel, and guess the contents of each bag. I don’t even know if these will come in blind bags, or in boxes like the VIDIYO series minifigs.

As far as I know, this series will drop in September 1, 2021, along with all the other new LEGO sets being released on that day. The LEGO Group has become very secretive on the new releases until the actual release date. However there was a store in California that apparently sold a few early to someone who posted it on line. Once that happened the internet became abuzz about them, and the rest is history.

I never publish photos until I have them in hand or they are on the official website – I don’t want to break copyright for LEGO, and all the information I have is through my research on-line. Information is subject to change as I learn more.

This is what I’ve heard will be arriving – as they are confirmed I’ll be adding them to my store and make them available for pre-order. For now you can click on the character you want and enter your email and I’ll let you know when they are available.

I’m very excited for this new series. My friends know that I am a LEGO Fan. But lately LEGO has gotten very Strict on their press releases and information slippage. I’m not a LEGO Leaks site, but instead wait for multiple sources to announce the series, and then ensure that I can get them before I offer them for pre-sale – which I have done.

Please let us know your thoughts on the new series in the comments below!