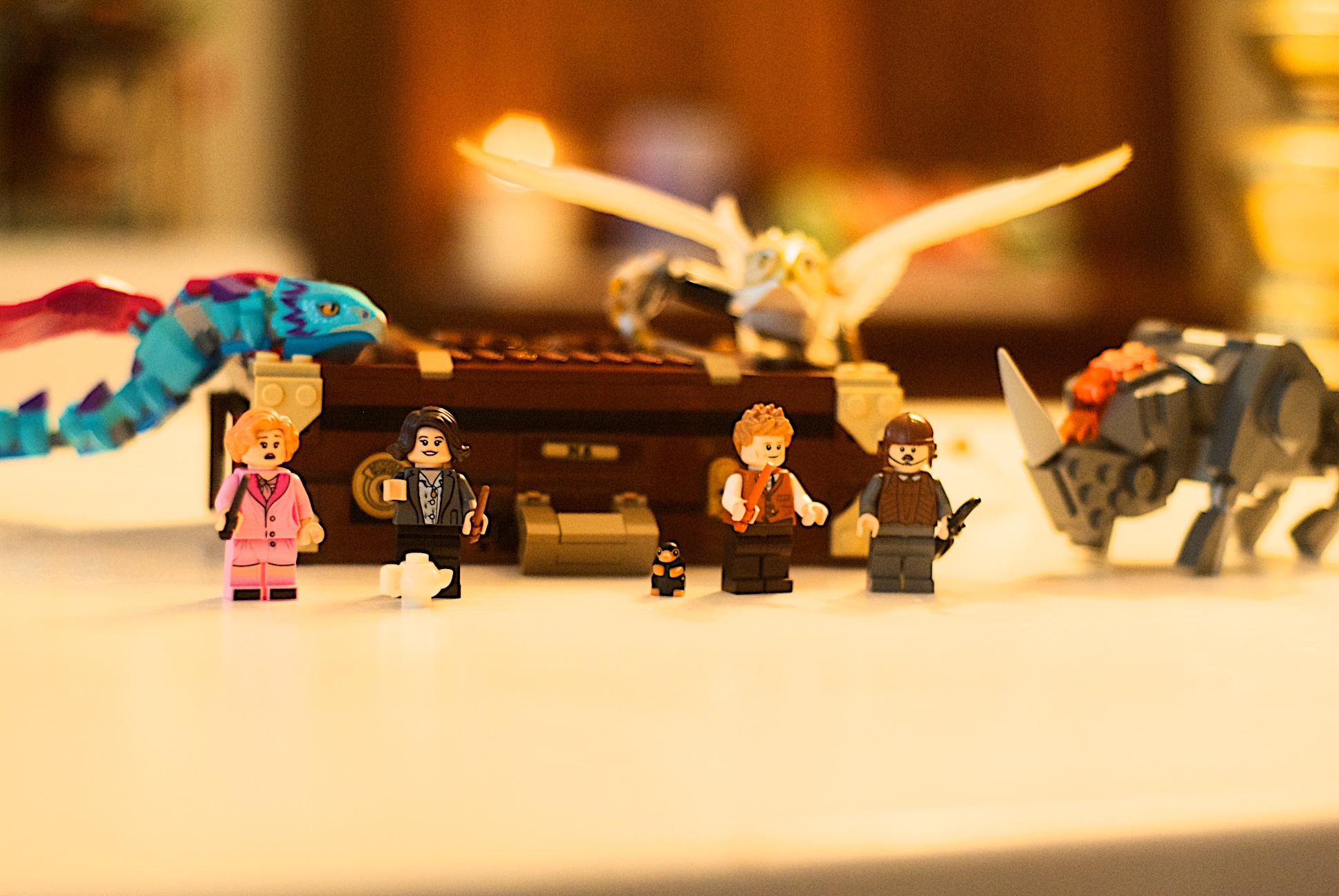 For several weeks, this set, LEGO set 75952, Newt’s Case Magical Creatures, sat in my to be built pile.  I didn’t know how cool this set was until I actually saw the movie.  Once I did, I know I had to build the creatures.  That’s how it started.

This set comes with 4 minifigures, 3 brick built creatures, and a cleverly designed case to hold them all together.  I don’t want to give away too much about the movie, or the different creatures.  Let me give a little back story, that should help clear some things up, and explain more about this set without giving away any spoilers.

This set is based on the 2nd movie in the Fantastic Beasts storyline.  It comes about 60 years before the Harry Potter books we all know and love.  This movie, “The Crimes of Grindlewald” has a bad guy – Grindlewald, who isn’t part of this set.   Of course there is a “good guy” too – and that is Newt Scamander.

Newt is an amazing wizard. Not only does he know lots of different spells, but he really has a soft spot for animals.  Not just any animals, but special magical creatures.   He takes them in, so they won’t be hunted or hurt.  He befriends them and they trust him.  Of course they are still wild, and cause some mischief, but I’ll save that story so you will have a great experience watching the movie.

Anyway, I had this set just sitting on my shelf with a bunch of other sets that I figured I’d get around to building some day, or selling after they were retired and increased in value.

But then after I saw the movie, I knew these builds would be perfect for Instagram Photos.  Be sure to check out my IG page for more.

In the first bag, there are 2 minifigs, and 2 flying creatures.  Newt Scamander with his Niffler, and Tina Goldstein holding a white teapot.

The first creature to be built is an Occamy.  It’s egg shells are made of silver, and it has the ability to grow (or shrink) into the space available to it.  That means if it is in a big room, it is a HUGE creature, or it can shrink to fit inside a teapot.

The other Creature in bag 1 is the Thunderbird.  It has 3 sets of wings – that can, according to legend flap strong enough to create a storm.

There are about the same number of pieces in bag 2 as in bag 1.  There are also 2 minifigures in this bag – Queenie Goldstein, and Jacob  Kowalski, plus an Erumpment.

An Erumpmet is a cross between an elephant and a rhino – but has a magical power where it can inject lava (or something like that) into trees and other such things.

On a side note, I got to meet Alison Sudol, the actress who plays Queenie at LeakyCon in Dallas this last summer.  I gave her one of the new (at the time) minifigs of her character, and got her signature in return.

When I used to play Dungeons & Dragons so many years ago, one of the first possessions I received, and my most treasured one was a bag of holding.  It was a small bag, big enough for my hand to fit into, but could hold whatever I put into it.

Newt’s suitcase is exactly like that, but more.  When he opens his suitcase, a whole different world is inside.  It’s basically his own personal zoo, with different environments suited for each creature he has rescued.

Building bag three of this LEGO set hints at that zoo.  It is also similar to the recently published LEGO Pop-Up Book, however instead of using the SNOT technique it is more of a traditional plate build.

There is a cool little house built into one side and the roof opens to show what’s inside.

Bag 4 finishes off Newt Scamander’s case.   There are basically four parts:  The house, left and right sides, and the top.  Tons of great details built in.  Each section is hinged, and the entire case folds closed for transport.

Inside it is minifigure scale, but unfortunately it’s not big enought for all the figs and creatures to fit inside (that would be super cool).

Overall, this became my second favorite set from the new release of the Lego Harry Potter Incredible Beasts sets.  My favorite, of course is the Hogwart’s Express, but only because I LOVE LEGO trains.