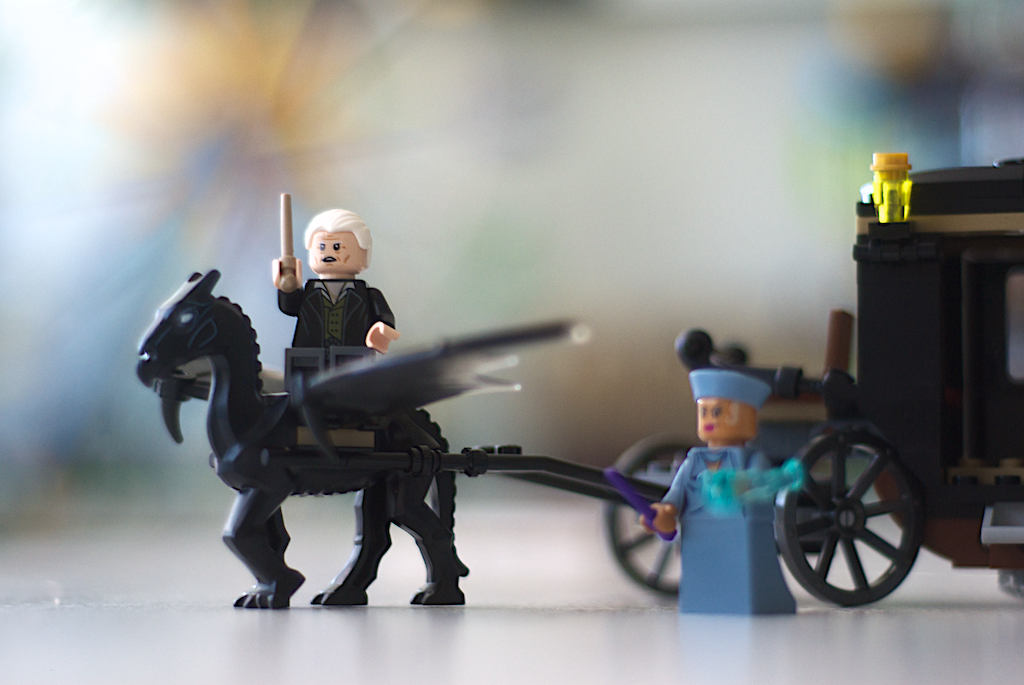 Earlier this week, My wife got me tickets to see the new Harry Potter Fantastic Beasts movie “The Crimes of Grindlewald” a few days before it’s general release.

About half of the new Harry Potter Lego sets were based on the Classic Harry potter scenes – Quiddich, the Hogwarts Express, and the two builds of Hogwarts School of Witchcraft and Wizzardry.

But two sets are based on new characters in the Fantastic Beasts Series, Newt’s Case of Magical Creatures and this set – LEGO Set 75951 Grindlewald’s Escape.

With 2 minifigs, a Thestral, and a black Carriage there aren’t a lot of pieces, but the minifigs are exclusive, as is the magical horse.

The first minifig is Gellert Grindelwald.  He was a very hard to get minifig in the blind bag series, and here he is a bit different (and better if you ask me).  The other is Seraphina Picquery, who has a one of a kind purple wand.  There are also some blue trans fireballs that can be launched directly from a minifigures hands which are pretty cool, and pretty easy to loose.

Originally introduced in “The Order of the Phoenix” Thestrals are invisible horses that are classified as dangerous, but can be tamed.  Also they can only be seen by people who have witnessed death.  They are only currently available in this set.

The final, and biggest build is the carriage.  Black (of course) with a removable top and opening doors, there is room for a minifig inside on a red seat, and another in front in a brown chair.  The front two wheels are attached using some Technics Bricks and that allows them to turn side to side, as well as rotate.

Overall I like this set a lot- I did quite a few shots with it on my Instagram account when the movie was released, and I think I’ll leave it together and find a spot for it in Brick Land.