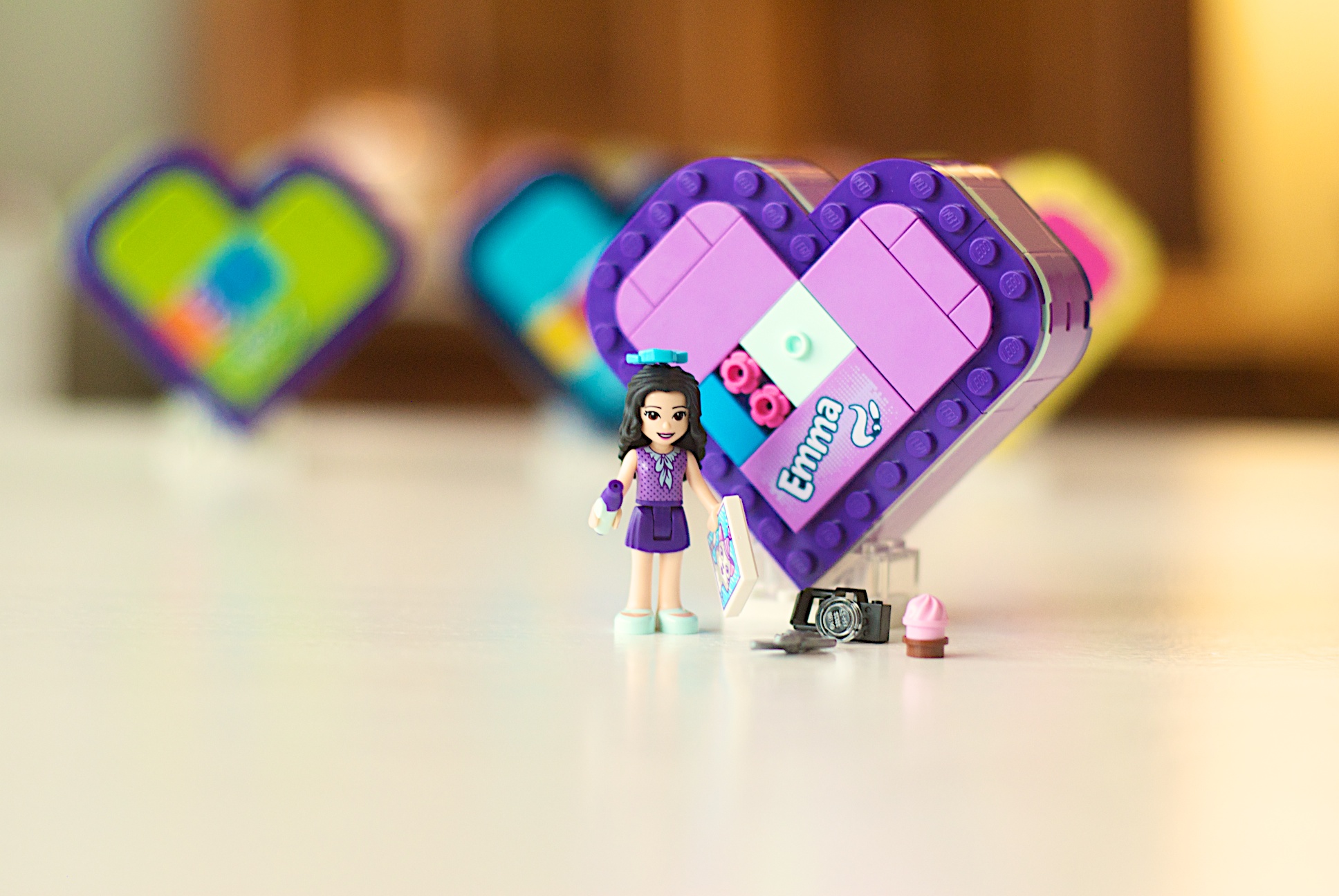 Emma is the artistic one of the LEGO friends. Each of the 5 main characters has different traits, and this LEGO Friends set contains items that suit Emma.

There are 85 pieces in this set, including 1 minidoll, the Emma friends Minidoll. She is part of a series of 5 similar Heart boxes, one for each character in the Friends Lego series: Mia, Stephanie, Emma, Andrea, and of course Olivia.

This set also comes with a heart shaped box that is made out of bricks in Emma’s favorite color – Purple. There is a special 2×4 printed tile with Emma’s name on it, a LEGO marker that the minidoll can hold in her hand, a 2×2 printed tile of a cat, a black LEGO camera, a pair of scissors, and a mini cupcake, too!

This is one in a series of 5. Each LEGO friends character Mia, Stephanie, Emma, Andrea, and of course Olivia comes with their own little brick built box. The box has a removable lid that can be a sage or a platform for her to stand on, plus more. Including some little flowers and a 2×4 LEGO tile with the name Stephanie printed on it.

The lid fits perfectly on the box, and each box for each character is stackable, making you want to collect them all.

Inside the box, is Emma, with a bunch of accessories including a pen, a picture on a printed 2×2 tile of a cat, a camera, and a pair of LEGO scissors.

All in all these are great little sets. They are affordable at under $10, and very collectable. Even though you don’t get a lot of minifigures or minidolls for the price, you do get a lot of accessories that are related to the series.

Putting together a minidoll is very easy – it’s just like a minifigure. Connect the body part to the legs part. Put on the head. Add hair. The minidolls don’t have 2 faces as their heads are shaped differently, and are not compatable with regular minifigures. In fact, no part of a minidoll can connect to a minifig. They are completely different. But for me, they work quite nicely in my LEGO city, as they do resemble Disney Princesses. They are like minifigs in costume if you ask me.

This set was released  in January of 2019 on the New Year’s Day. I bought this set with my own money at my local Target store, the week after it came out.